Table of Contents
Published in Politics
Written by Kristyn Pilgrim

Expect Generation Z to head to the polls en masse, unlike many other generations when they were that age. They’ve become involved in politics from an unusually young age, thanks to the help of digital media and youth activists like Greta Thunberg. They’re also the most diverse and (digitally) connected polling constituent. This group of recent and soon-to-be graduates are estimated to see turnout numbers of nearly 24 million, but can we really trust the polls to accurately represent their collective voice?

If your answer is “no” or “unsure,” you’ll want to read the contents of the following study. We collected the input of hundreds of voting-eligible Gen Zers about the issues that matter to them, the current government’s impact on them, and the specific political differences between Trump and Biden. For a firsthand account of what the youngest (and perhaps most influential) voting generation has to say right now, keep scrolling.

Mathematically speaking, Gen Z has more future at stake than any other generation voting. The first part of our study looks at how they’re feeling about the future of their financial security as well as how optimistic they feel about graduating. 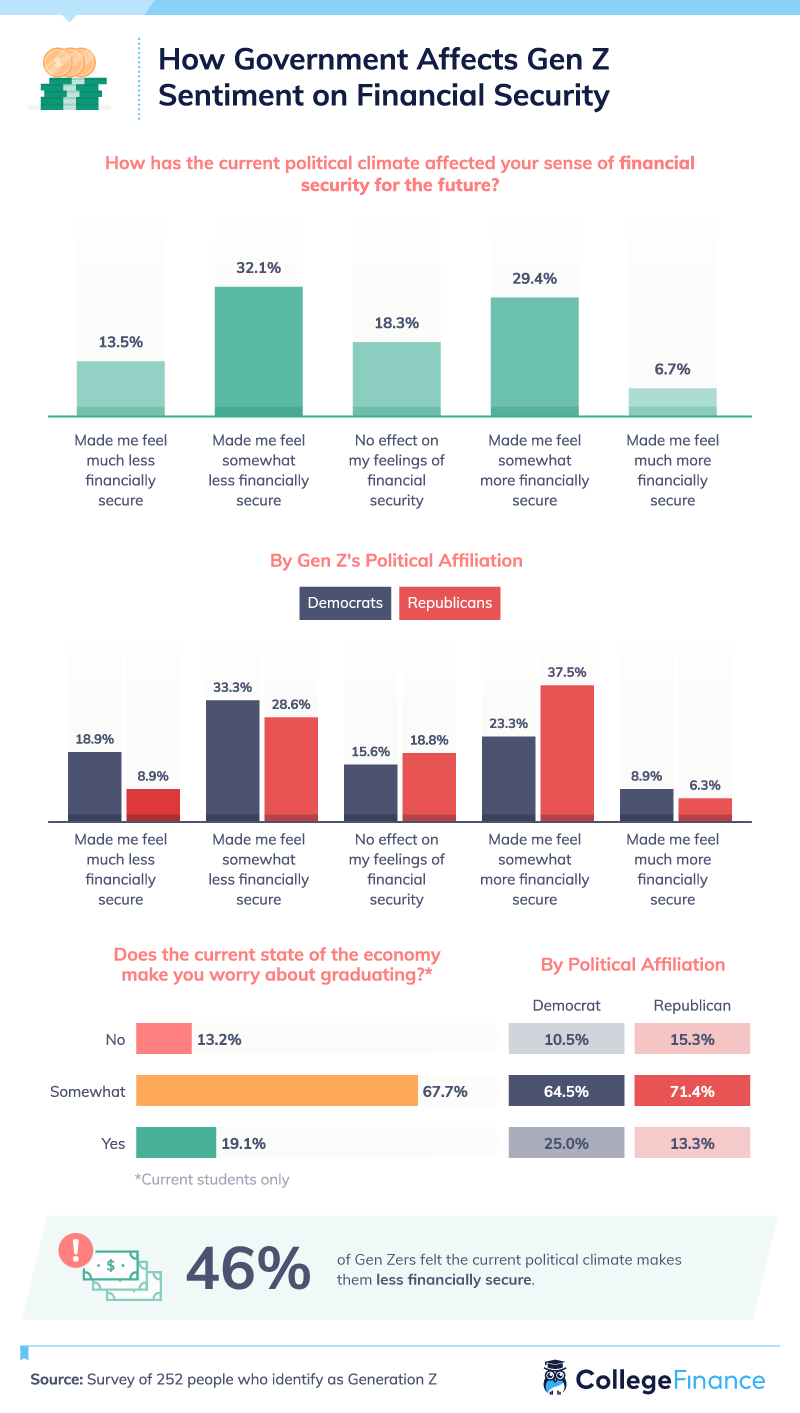 Optimism does not reign supreme among young voters today. The current political climate specifically made 46% of Gen Z feel either much less or somewhat less financially secure. Political affiliation did have an enormous impact here, however: Republicans were much more likely to believe their futures financially secure due to the political climate itself. Nevertheless, both Republican and Gen Z Democrats alike agreed that the economy’s current state does make them worry somewhat about graduating.

Those who had already begun the job search seemed to have bad news for those that will come after them: Current job searchers felt the most pessimistic about their future out of all respondents. Of these recent graduates, nearly 80% voiced a plan to vote for Joe Biden.

Moving past general emotions and into political specifics, the next part of our study presented Gen Z respondents with specific issues and asked them to select which candidate was best equipped to handle each one.

The 80% of recent graduates who wanted to vote for Joe Biden may have been primarily influenced by his stance on student loan forgiveness: The majority of both Democrat and Republican voters surveyed agreed that Joe Biden was best to handle the issue of the student loan burden. Biden’s current plan for this issue extends “relief to borrowers enrolled in income-driven repayment plans, which make monthly payments more affordable by capping them at a share of a borrowers’ income.” This was evidently a highly appealing policy for 71% of Gen Zers overall, as were Biden’s COVID-19-related solutions for college campuses, for which even many Republican voters (53%) gave Joe Biden the edge.

Trump was overall most trusted when it came to specific economic policies. Democrats were more likely to consider Trump for issues like stabilizing the economy after COVID-19 (41%), a stance nearly 78% of Republicans shared. More than half of young voters overall also agreed that Trump was the better candidate to help ensure the security of an economic future. Overall, however, all other specific issues broached were felt best handled by Joe Biden.

The last part of our study faced respondents with a seemingly simple question: Who are you voting for? Gen Z responses are broken down below, as well as some open-ended thoughts they wanted to share on the matter.

Donald Trump received much more support from his own party than Joe Biden did from his, at least as far as Gen Z voters are concerned. While 75% of Republicans wanted to stick with Trump, Democrats were not as resoundingly behind Biden. In fact, more than a third of Democrats (34.4%) said they intended to vote for Trump. As one 21-year-old man articulated, “I think President Trump has done an excellent job making people from both sides skeptical of the government and its intentions.” A 22-year-old woman voiced concern over “memory issues” from which Biden may suffer in office.

Biden certainly had some supporters, however. Almost a quarter of Republican Gen Z voters intend to check his name in the ballot box this year, and 40% of those without a political affiliation would be choosing him as well. As one 19-year-old woman shared, “I feel that unseating the current president is a large priority right now, so while I don’t completely agree with many of the Democratic candidate’s values, I believe he is the better choice …”

More than 1 in 10 Gen Zers intended to not vote at all, however. These voters shared a lack of faith in the political system, a belief that their “vote doesn’t count,” and that they don’t support either choice of candidate enough to cast a ballot. Ironically, many political experts insist that the end result of the election will actually boil down to how many nonvoters ultimately decide to turn up.

Gen Z voters ultimately reflected the diversity of ideas that has become characteristic of their age group. Republicans and Democrats of this age both appeared willing to consider the other candidate’s strengths, even if other parts of their candidacy directly clashed with their own beliefs. When it came to handling student loans and the college experience specifically, however, Biden appeared to be the favorite candidate.

We are not here to say whether Biden is the best candidate for college finances or whether or not he will take office in 2021. We are, however, the experts in college financing and are here to tell you that you don’t have to wait on a presidential candidate to take control of your finances for school. Whether you are looking to plan, borrow, or repay, College Finance is here to help. We’ve helped thousands of students in exactly your boat and can help you reach your goals no matter the candidate in office. Head to College Finance today to learn how we can best serve you.

We surveyed 252 people who identified as Generation Z and asked them about their financial security and how the current political climate is affecting their outlook on financial opportunities. The average age of respondents was 21 years old, with a standard deviation of one year. We asked respondents to describe their political affiliation, and 112 identified as Republicans, 90 as Democrats, and 50 as other political parties such as Independents or nonaffiliated. Around 61% of respondents were male, and 39% were female.

Survey data has certain limitations related to self-reporting. These limitations include telescoping, exaggeration, and selective memory. We didn’t weight our data or statistically test our hypotheses. This was an exploratory study of Generation Z’s outlook on politics and financial security.

Getting everyone to the booths, no matter the generation, is crucially important to democracy as an institution. If you know someone who could benefit from the findings of this study, please share it with them. Just be sure your purposes are noncommercial and that you link back to this study.

Many or all of the products presented on this page are from sponsors or partners who pay us. This compensation may influence which products we include, as well as how, where, and in what order a product appears on the page.

Are you asking yourself how you'll cover the cost of attending school this year? Fill in your information below to find out!