Student loan forgiveness seems radically simple to some: As the student debt crisis continues to deepen, why not wipe the slate completely clean? But beyond this concept’s straightforward veneer lies a world of complexity, involving nuanced distinctions of perception, policy, and principle.

Among progressives, there is considerable debate as to whether forgiveness is even desirable, let alone financially feasible. Even proponents of forgiveness differ greatly in their proposals. Some conservatives see debt forgiveness as a bipartisan priority, whereas others regard it as a political pipe dream or an ethical nightmare.

More fundamentally, an ethical question looms over the ongoing debate: Is it fair to forgive student loans now, when others have worked so hard to repay their own? Does forgiveness punish those who made wise financial choices, such as people who chose not to attend college or who worked while in school, or parents who saved up and worked extra shifts to put their kids through college?

We surveyed over 1,100 Americans about these thorny questions, exploring their perceptions of student loan forgiveness and its fairness. Our results reveal deep political divisions and areas of surprising unity and the profound influence of where people are with their own student debt.

To gauge perceptions of student loan forgiveness, we asked respondents to express their degree of support for such a program in general. We then studied how support differed by political affiliation and debt status, assessing which factors seemed most influential on this issue.

As one may perhaps expect, respondents who identified as Democrats were most likely to support forgiveness. Although some experts question whether eliminating student debt would actually serve progressive priorities, prominent Democrats have championed the idea publicly. Independents and Republicans were significantly more wary, although those with student loan debt were far more willing to reject the party line. Among Republicans with current student loan debt, a third strongly supported student loan forgiveness.

Although student loan forgiveness is often debated in general terms, specific policy proposals differ significantly. Indeed, respondents across the political spectrum varied greatly in their support for specific forgiveness measures and whether they could actually be implemented.

Some relatively modest proposals garnered support from a majority of Democrats, Independents, and Republicans. For example, the idea of forgiving interest on all student loans appealed to 70% of respondents, including most people in each party. In fact, Republican Sen. Marco Rubio recently introduced a bill to eliminate interest on federal student loans, so forgiving existing interest would seem like a complementary policy.

Similarly, the idea of month-by-month payment reductions tied to income also earned wide approval across parties. While the government currently offers income-driven repayment plans, borrowers are still accountable for repaying the total they have borrowed over time.

While some may see the need for large-scale, all-or-nothing government endeavors, our analysis of these plans shows a clear correlation between restraint and widespread support. Unsurprisingly, the plans with the strongest support were also widely seen as possible: Nearly two-thirds of respondents thought month-by-month payment reductions and interest forgiveness were realistic. And even though Republicans tended to take a skeptical view, 70% thought at least one forgiveness measure could really happen.

Interestingly, people with current student loan debt were most likely to view each measure as realistic. Yet, existing student loan forgiveness programs, such as one for people in public service careers, are widely seen as convoluted and ineffective. Perhaps for many currently paying off student loans, optimism about political change is a crucial coping strategy.

Agreement on Advantages, Differences on Drawbacks

Discussions of student loan forgiveness sometimes center around beneficiaries: Who gains from a particular policy, and who gets overlooked? Does anybody get taken advantage of? Moreover, experts caution that erasing student loan debt could have unintended fiscal consequences for certain borrowers. Accordingly, we asked respondents who they believed would benefit and suffer from student loan forgiveness – and in which ways. 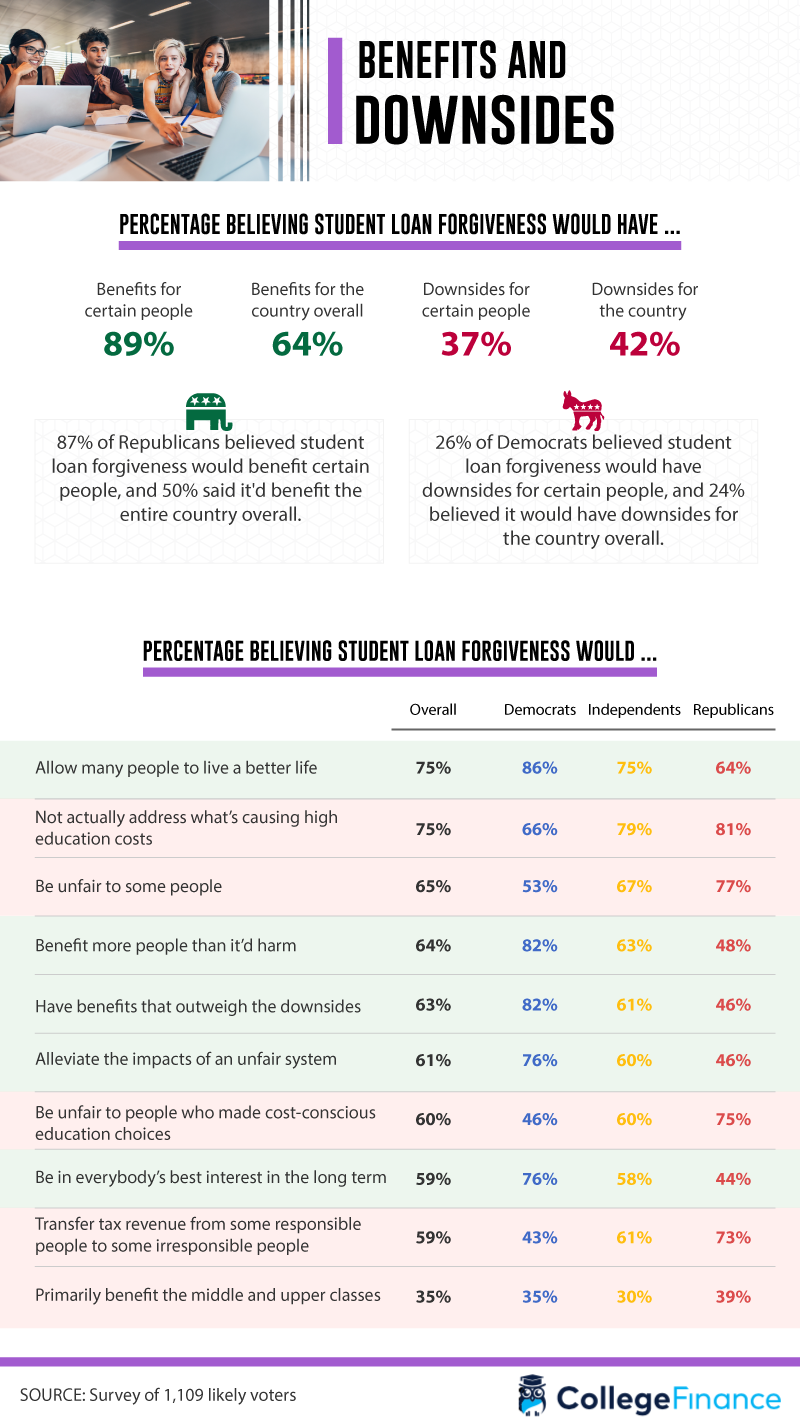 The majority of respondents agreed that student loan forgiveness would benefit certain individuals. In fact, 64% – including 50% of Republicans – thought it would have some benefits for the nation as a whole. Yet, major differences emerged regarding potential downsides, and mixed feelings were common about forgiveness’s cumulative impacts.

For example, most people agreed that student loan forgiveness would not address the underlying crisis of high education costs and that it would be unfair to some individuals. Sixty percent of respondents, particularly Independents and Republicans, specifically felt it would be unfair to those who had made frugal choices in attending college. Interestingly, relatively few people endorsed the view that forgiveness would primarily benefit the middle and upper classes, a charge made by many critics.

However, most respondents felt forgiveness would be beneficial on balance: Almost two-thirds believed it would benefit more people than it harmed, and a similar portion said its upsides would outweigh its downsides. It seems that while many proponents are aware of potential pitfalls, they remain convinced that student loan forgiveness would be worth it in the long run.

Is forgiving student loan debt actually ethical, given the sacrifices previous borrowers have made to repay their own loans? Is it fair to those who would have attended college but chose not to incur significant debt to do it? Perhaps the whole student loan system is fundamentally unfair: Is it right to offer teenagers a massive line of credit, knowing their borrowing could mean decades of managing debt?

A majority of respondents saw offering large loans to teens as exploitative, although Republicans were less likely to take this view than Democrats and Independents. Additionally, 58% of respondents called the act of offering large student loans to teens irresponsible, with Independents and Republicans more likely to express this perspective. Given that roughly 7 in 10 college students take out loans to attend school, these systemic criticisms are certainly striking.

On a more specific level, certain anxieties seemed to resonate across political divides. For example, 83% felt student debt impacts young adults’ quality of life and deters them from reaching key milestones. These fears are supported by extensive research: From waiting to buy homes to skipping retirement savings, debt-burdened young Americans seem to be delaying smart personal and financial moves. Even if you believe that many were unwise to incur that debt in the first place, the widespread impacts of young adults’ student loan burden are hard to ignore.

On the other hand, many felt student loan forgiveness raised its own moral hazards. Indeed, more than 3 in 10 respondents (and nearly half of Republicans) felt forgiving student debt would be unfair. The most common concerns were rewarding people who paid too much for school or made reckless educational decisions. Additionally, 60% felt forgiveness would reward colleges for raising their costs. Indeed, tuition prices have rapidly outpaced wage growth in recent years, certainly contributing to the student debt crisis. The easy access to government-backed loans, many Republicans believe, is a primary factor in causing college costs to skyrocket.

Turning to 2020: Forgiveness as a Factor

Turning to the 2020 presidential campaign, how will candidates’ positions on student loan forgiveness influence voters’ choices? While the issue was at least somewhat important to most people, our respondents voiced widely varied intentions and convictions.

Respondents who identified as Democrats were particularly attuned to student loan forgiveness. In fact, 41% of Democrats with student loans said they would definitely vote for any 2020 presidential candidate who promised to erase their debt. On top of that, 35% said they would probably be willing to vote for anybody willing to wipe the slate clean. These sentiments are not lost on Democratic candidates, and some have announced specific debt relief plans.

These include Bernie Sanders and Elizabeth Warren, who respondents deemed most likely to successfully forgive student debt. Interestingly, Donald Trump tied for third in this ranking, perhaps because of his decision to cancel the student loan debt of disabled veterans. Conversely, respondents were far more skeptical of other candidates, even those with specific loan forgiveness proposals. Pete Buttigieg, for example, has called for a national service program with debt forgiveness benefits – but just 9% of respondents thought he could actually get it done.

Generally speaking, those with current student debt were most likely to describe forgiveness as a very important political issue. But even among those who never took out loans or did not attend college, a majority described the issue as at least somewhat important. It seems that you don’t need to have loans of your own to realize just how much is at stake in this debate.

Possibilities Beyond Politics: Escaping Debt on Your Own Terms

Our findings present profound differences of opinion on student loan forgiveness, with clear contrasts among political parties. But if partisan divisions were evident, so were potential areas of agreement, as well as real diverse perspectives on specific measures. Additionally, we found a broad consensus on certain subjects, including the potentially negative impacts of student loan debt and deep flaws in the lending system.

In a political climate rife with tension, could it be wise to emphasize our common ground? If we can come together on widely popular measures, such as forgiving interest, could we lay the groundwork for further discussions in the future? Possibly, although there’s ample reason for skepticism as well. While our findings show widespread support for certain modest proposals, there’s no guarantee that public opinion will translate into legislative change on student loans.

Accordingly, if you’re currently repaying your student loans, don’t wait for political change to start thinking strategically. You have a wide array of options at your disposal, ranging from federal repayment protections to refinancing with private lenders. At CollegeFinance.com, we’ll help you assess your options so that you can create a swift and sustainable plan to eliminate your own student loans.

We surveyed 1,109 people using the Amazon Mechanical Turk platform. Survey quotas were used to ensure an accurate representation of all perspectives, and the following figures reflect our respondents’ demographics.

To ensure that respondents took our survey seriously, all respondents were required to identify and correctly answer a decoyed attention-check question. These data rely on self-reporting, and strict statistical testing has not been performed on these findings. Potential issues with self-reported data include, but are not limited to, exaggeration, selective memory, and attribution errors on the part of respondents. In some cases, questions and responses have been rephrased for clarity or brevity. Our margin of error is 3%, with a 95% confidence interval.

As our results clearly indicate, student loan forgiveness is likely to remain a compelling and controversial issue in the months and years ahead. Accordingly, you probably know some folks with strong feelings on the subject, and others still trying to decide where they stand. Feel free to share this project with them, adding some evidence to this ongoing debate. When you do, please link back to this page to attribute our team. We also request that you use this project’s content strictly for noncommercial purposes.