The State(s) of American Financial Literacy

Financial literacy is a foundational element of a successful life. Understanding how mortgages work, how to budget for retirement, and how to open and manage savings and investment accounts … without an understanding of the bare necessities, you’re in for a more challenging ride.

Unfortunately, for most Americans, these kinds of challenges hit a little too close to home. Between 2009 and 2018, a study conducted by the FINRA Investor Education Foundation revealed an 8% decrease in the number of people who could correctly answer questions about interest rates, inflation, and more (from 42% to 34%). That means almost two-thirds of the population is under-equipped.

We wanted to gain a more nuanced understanding of Americans’ financial literacy based on demographics and educational backgrounds, and how financial knowledge affects people’s relationship with student loans. Here’s what we discovered by analyzing the FINRA Financial Capability Study and data from the U.S. Census Bureau and the U.S. Department of Education.

What are the knock-on effects of financial literacy when it comes to student loan hygiene?

Not all financial topics were created equal, though. For example, Americans who had an undeveloped knowledge of compound interest were almost twice as likely to have student loans, compared to knowledgeable respondents (82% versus 48%). The discrepancy between these two camps when it came to inflation and investments, however, was not quite as large.

People who knew a thing or two about finance were also much less likely to make late payments on their loans. An impressive 70% of high-scoring respondents had never lagged on their payments, compared to 42% of low-scoring respondents. While people with low and moderate scores reported nearly identical incidences of one-time or frequent late payments, high scorers accounted for less of the pie in both cases.

Does it pay to be book smart? How much does education correlate with financial literacy? What about age and gender? 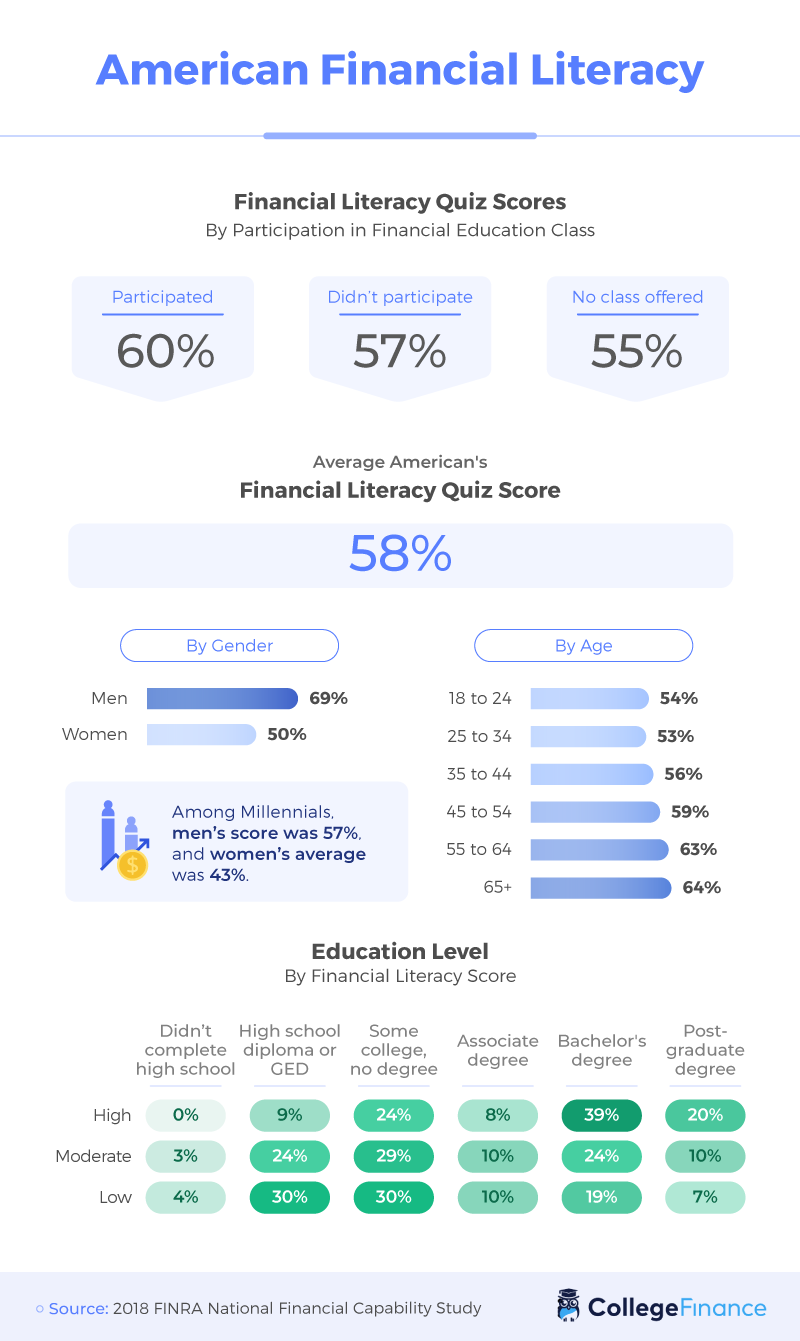 The average American scored 58% on the FINRA financial literacy test, leaving something to be desired. The country is in the midst of a growing financial literacy issue, which some experts say can be attributed in part to the taboo that surrounds conversations about money. Due to reasons like potential embarrassment and fear of conflict, 44% of Americans would rather discuss death, religion, or politics with a loved one instead of personal finance.

On the whole, men turned up higher financial literacy scores than women (69% compared to 50%), and there was a near-linear correlation between older Americans and higher scores: Respondents aged 18 to 24 scored an average of 54%, compared to the over-65 crowd at 64%.

When the data was sliced by educational background, people with a bachelor’s degree accounted for the largest volume of high scores – even more than their postgrad counterparts (39% versus 20%). While higher education was loosely to moderately correlated with higher scores, there were some surprises to be had: For example, respondents who had completed some college but had no degree were more likely to have a high financial literacy score than postgraduates.

Even if Americans wanted to become more financially literate, how widely available are the educational resources to do so? 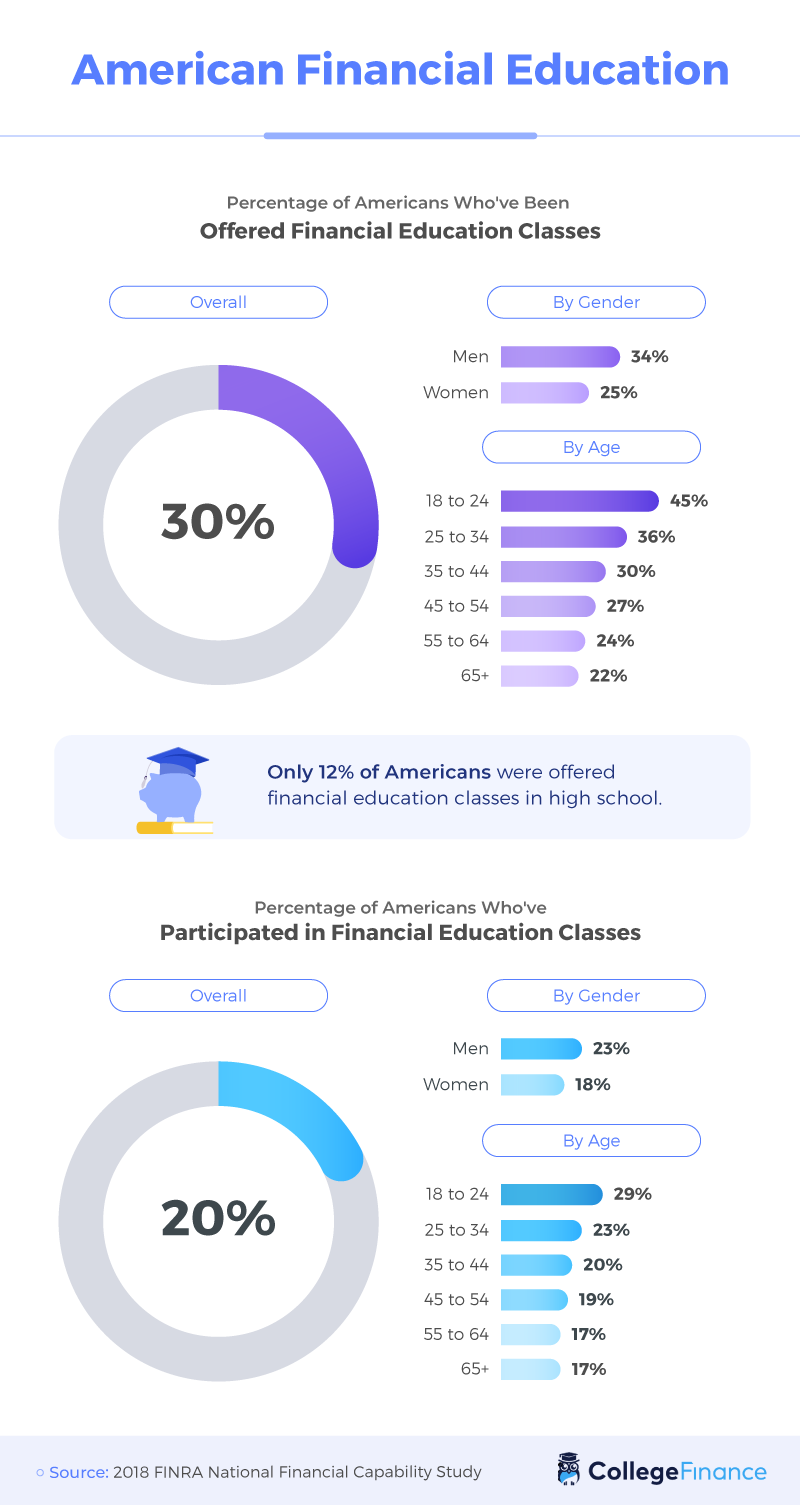 In recent years, many people have lamented the disappearance of home economics classes in high school. Some feel so shortchanged, in fact, that they’ve signed up for a whole new breed of home economics courses targeted specifically toward millennials – dubbed adulting classes – to fill in the blanks.

Financial literacy is part and parcel of successfully navigating adulthood, and in the United States, the education gap cannot be ignored. Just 30% of respondents had been offered a financial education class at some point in their lives, and an even smaller 12% said they had access to one in high school.

The good news is, our data revealed a strong inverse correlation between age and the availability of these courses: More than twice as many people in the study’s youngest generation were offered financial literacy courses, compared to the oldest generation (45% versus 22%, respectively). Participation in financial education classes followed a similar trend in terms of popularity among young people.

Which American states had the most financially literate residents, and which states offered the most opportunities for people to learn?

Just like any other demographic factor, financial literacy varied significantly on a state-by-state basis. We took a look into the availability of financial education resources by state, as well as the population’s participation rate in said courses, to determine a literacy ranking for all 50 states.

New Hampshire, a state where more than one-third of residents have a bachelor’s degree, and 93% have graduated high school, was the most literate. Their financial education availability and participation rankings were in the top third on a national scale, but they were nevertheless able to snag No. 1. Meanwhile, second-place Utah had the highest rankings in both availability and participation.

While West Virginia ranked last in both of those categories, the state still managed to place 46th on the overall financial literacy list (as opposed to last). Instead, it was Mississippi – which had the 11th highest financial education availability rate and the 18th highest participation rate – that bottomed out the list.

While this southern state has a reputation for ranking very low on quality of life factors like health care and economic stability, it was the No. 1 state for student test score gains in English and math on the 2019 National Assessment of Educational Progress (NAEP) – so things may be looking up!

The State of Student Debt

Let’s take a look at which states have the highest concentration of indebted graduates.

Americans are currently shouldering a student debt burden that exceeds $1.5 trillion, and every state has a stake in that sum. The two hardest hit states in terms of loan prevalence are currently Ohio and Georgia: 15% of residents in each of these states have student debt to pay off. Not far behind were Mississippi, Minnesota, Michigan, and Pennsylvania, all of which clocked in at 14%. Meanwhile, Wyoming, Utah, and Alaska bottomed out the list at 8% each.

While the three most expensive schools in the country are located in California, Illinois, and New York (based on 2018-19 tuition), all three states had fairly middling rates of student loan debt. On the whole, even though the percentage of debtors in each state varied to a degree, it’s important to acknowledge that America’s student loan crisis is a nationwide issue – one that, according to the data discussed above, could be solved in part by more substantial financial education.

Give Yourself a Leg Up and Get Literate!

Our analysis revealed a very important data point: People with a better understanding of finance tended to have fewer student loans than less savvy respondents. The good news is, we also found that younger people were taking a greater interest in financial education, and it was becoming more widely available.

If you’re someone who wants to jump on the financial literacy train, there’s no better place to start than College Finance. Our free online resources cover everything from creating a budget to finding the best scholarships and paying off your loans as quickly as possible. Visit www.collegefinance.com to start your literacy journey and level-up your financial future!

For this analysis, we crossed data from the 2018 FINRA National Financial Capability Study with data from the U.S. Census Bureau and the U.S. Department of Education. We collected, collated, and fact-checked the data manually, and no automated software or “scraper” was used. To help maintain accuracy, data was weighted for state and national totals.

It doesn’t cost a thing to follow our fair use guidelines! You’re free to share this information for noncommercial purposes – just make sure to always link back to the original article so everyone can get the full story.