Published in Blog
Written by The College Finance Team

Cashing In On College

Cashing In On College

At the time of this writing, U.S. student loan debt has surpassed $1.6 trillion – and that number grows with each passing second. Among these dollars borrowed, we can assume some were spent rationally and responsibly, while others covered unnecessary or impulsive expenditures.

But we can do more than assume – we can get the information straight from the source. We asked 1,048 college graduates across the country to break down their true disbursements of money borrowed, their biggest wastes, and even the financial repercussions of specific purchases as a student. Continue reading to see what this group had to say about their student loan spending.

Residual disbursements are an excess of financial aid funding students may receive as a credit after tuition and fees have been paid. Students then can keep the money, return it to the lender, or a mix of both. While 63% chose the first, 22% chose to return some of the funds. In other words, only 15% of borrowers decided to return all the excess funds they received to the lender to jump-start loan repayments. 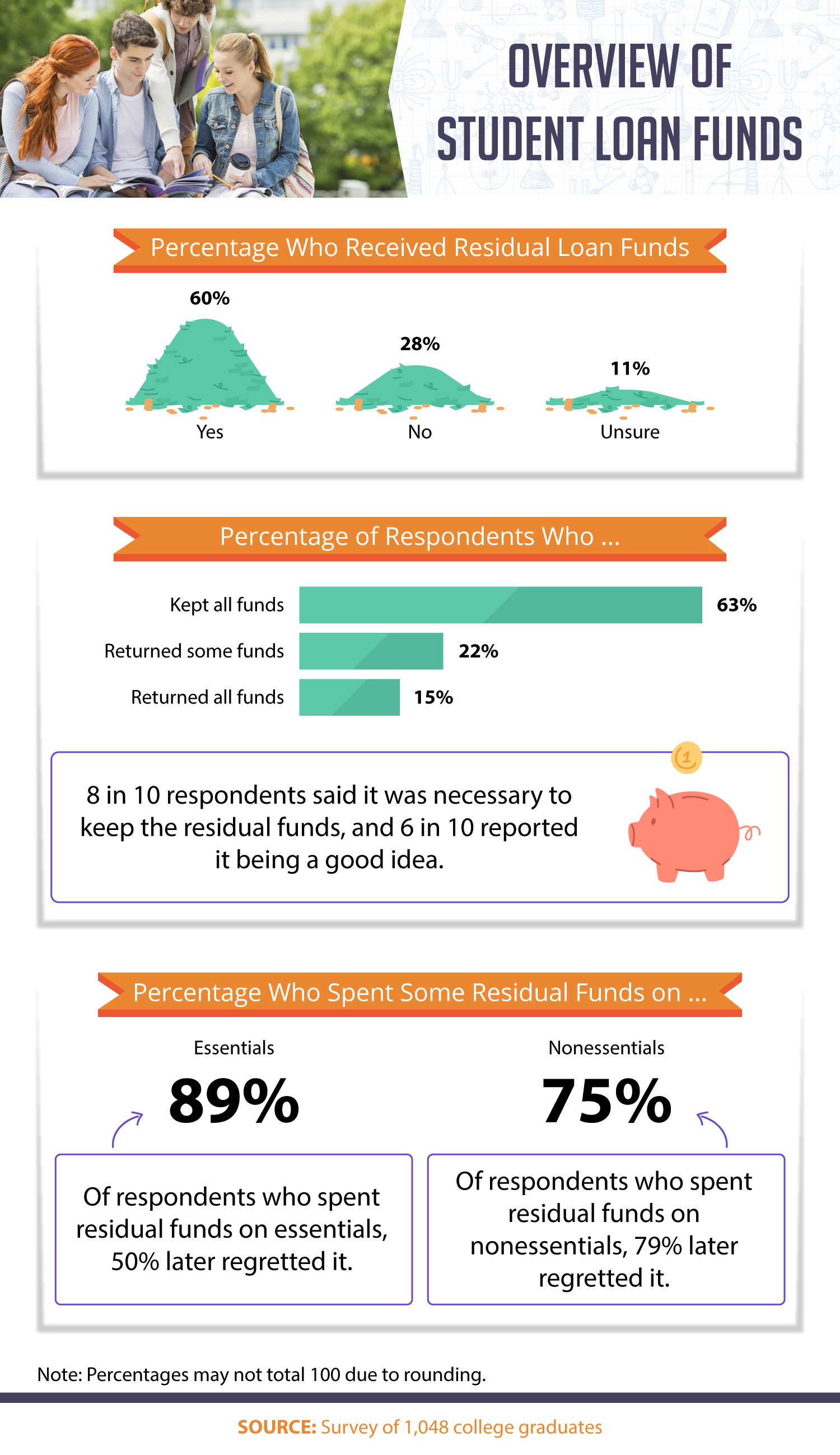 Of the 85% who kept some or all of their residual student loan funds, 89% chose to spend some residual funds on essential items. However, 50% of this relatively responsible spending group still said they regretted their decision. On the other hand, 75% of residual loan keepers spent some money on nonessential items, leaving 79% of them regretful over this decision. Because debt is such a significant source of stress, it’s no surprise that any additional spending would correlate with regret as well.

The top expenditures overall were essential. In fact, 69% of students surveyed spent residual funds on housing, followed by another 56% who used the extra money for additional education expenses. Even publicly funded schools incur unexpected costs, such as transportation, supplies, and hidden fees – all of which can stack up quickly over the course of higher education. Women demonstrated slightly more responsibility in this area, with 72% of female graduates spending residual funds on housing, compared to just 66% of men.

Above-average GPAs correlated with students spending more responsibly. On the other hand, those with poorer average GPAs showed an increased probability of spending residual funds on things like streaming subscriptions and parties.

On average, students spent $1,588 of their residual funds on a mix of essential and nonessential items. The most expensive “item” was housing, with an average cost of $3,405. With an average rent of $1,405 in the U.S., this significant amount may represent a short two months of housing. Additional education expenses also cost borrowers a pretty penny, eating up an average of $2,062 in residual funds. 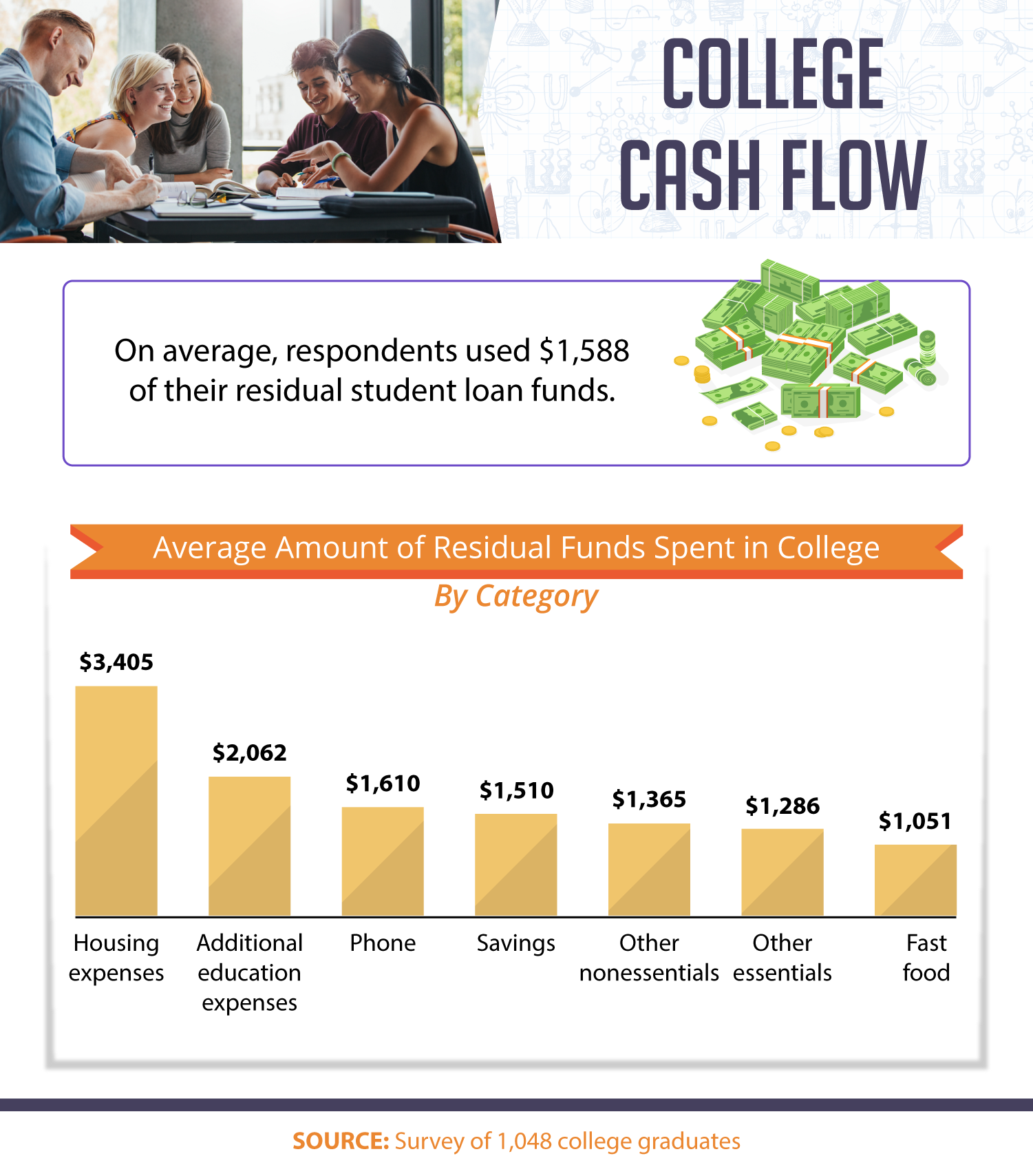 Phone bills, which we considered essential for modern education, was the third most expensive cost. On average, residual loan spenders doled out $1,610 on their phones, on average. While high, this cost may be necessary, as a student’s ability to communicate with others is not only necessary for things like group projects but also can foster important collaborative skills for both school and beyond. 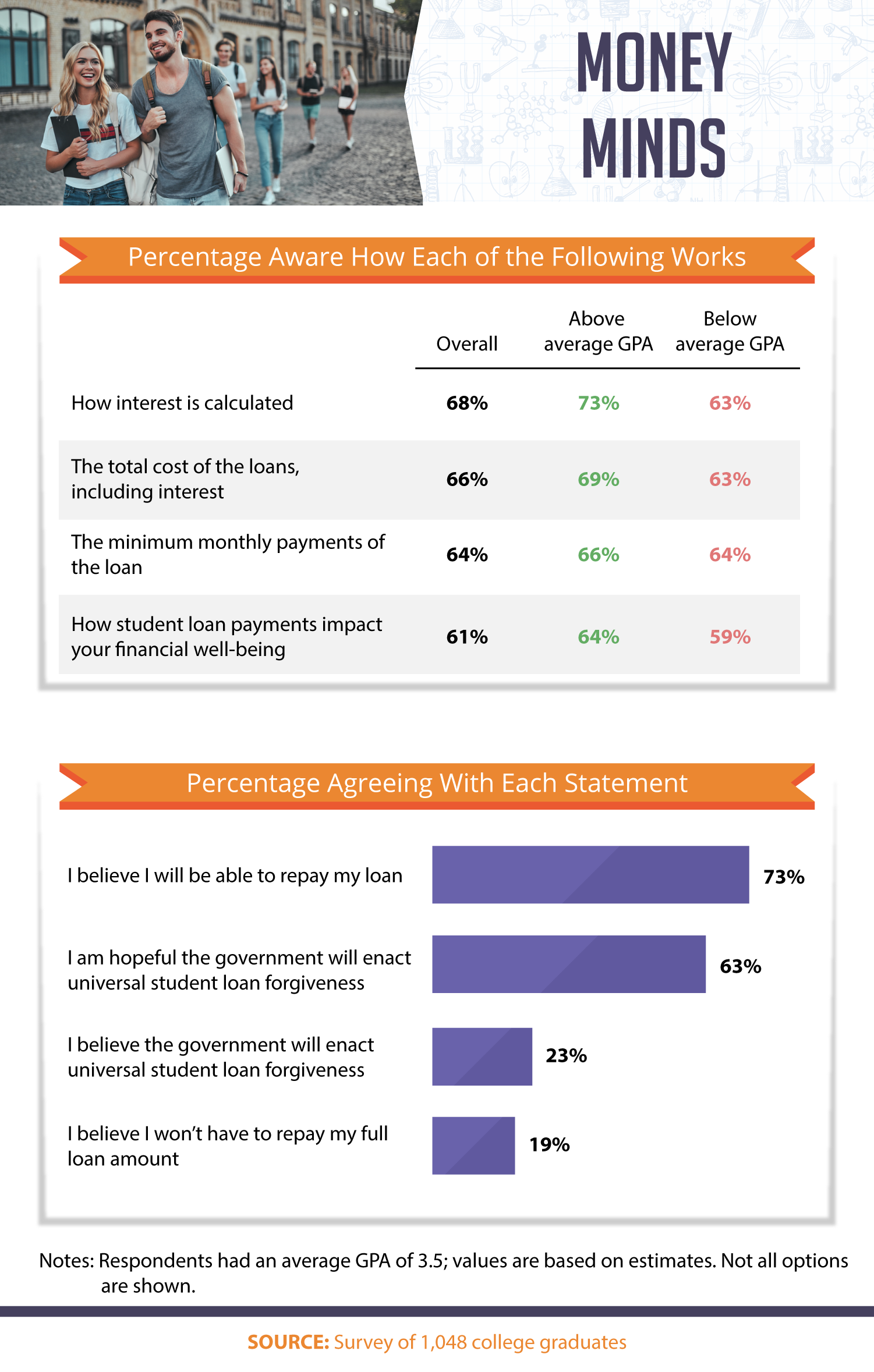 Hindsight is 20/20, as demonstrated by our respondents with regard to their debt. At the time students spent their residual funds, 69% said they chose to worry about it later. Half said they didn’t really think about the debt at all, while the same amount said they did think about it, but the spending didn’t seem to make a difference at the time. This lack of awareness is certainly not helping the fact that total student loan debt made another $25.2 million jump since within the past hour alone.

Nevertheless, only 27% of college graduates surveyed chose to maintain a budget in school. Students with an above-average GPA were slightly more likely to budget, although less than a third (32%) actually did so. Most financial advisers will tell you how important it is to maintain a budget, whether you have debt or not.

Overall, our data revealed students to be somewhat uneducated when it came to their loans, resulting in some regrettable financial decisions and future problems. Education on student loans can be just as important for a successful financial future as a college degree itself.

That’s why CollegeFinance.com has the information you need to understand what financing your college education really means. Knowledge is power, and in this case, it’s money as well. So stay informed, and head to CollegeFinance.com to explore your options today.

For this study, we surveyed 1,048 people who graduated from college in the past five years. Of the 1,048 people polled, 51.7% were female, 48% were male, and 0.3% identified as neither male nor female. The average age of respondents was 32, with a standard deviation of 9. An attention-check question was used to identify and disqualify respondents who failed to read the questions in their entirety. Furthermore, outliers were identified and removed, specifically where student loan funds and spending were questioned. The survey had a margin of error of plus or minus 3%, with a 95% confidence interval.

In many cases, questions and responses were rephrased for clarity or brevity. These data rely on self-reporting, and strict statistical testing has not been performed on these findings. Potential issues with self-reported data include but are not limited to exaggeration, selective memory, and attribution errors on the part of respondents.

In case we haven’t stressed it enough, financial education is important, so please share this article for noncommercial purposes. Just be sure to link back to this page so that its contributors can receive proper credit for their work.

Many or all of the products presented on this page are from sponsors or partners who pay us. This compensation may influence which products we include, as well as how, where, and in what order a product appears on the page.

Are you asking yourself how you'll cover the cost of attending school this year? Fill in your information below to find out!