The new coronavirus, COVID-19, has been a financial disaster for almost every corner of the economy. The stock market has seen its darkest days in over three decades, and over 700,000 jobs were lost in March alone.

In response to this sweeping economic crisis, the Coronavirus Aid, Relief, and Economic Security (CARES) Act was signed into law, an emergency assistance bill that touches on health care support for individuals and families, as well as business aid.

CARES also has a provision for America’s college students: As of March 13, student loan payments and interest accrual are suspended until September. While this measure doesn’t apply to private loans given out by banks or certain federal loans, this is still a step in the right direction when it comes to alleviating the financial pressures faced by nearly 45 million Americans with college debt.

To explore how students and graduates feel about the CARES Act and how the COVID-19 pandemic has affected their economic outlook, we surveyed 1,009 respondents who had attended or were attending college. Read on to explore our findings.

Does the Government Care Enough?

By halting student loan payments and interest, the CARES Act offers some temporary relief for people with debt, but not everyone shared the opinion that this measure is enough. (Read the full text of the bill here.) 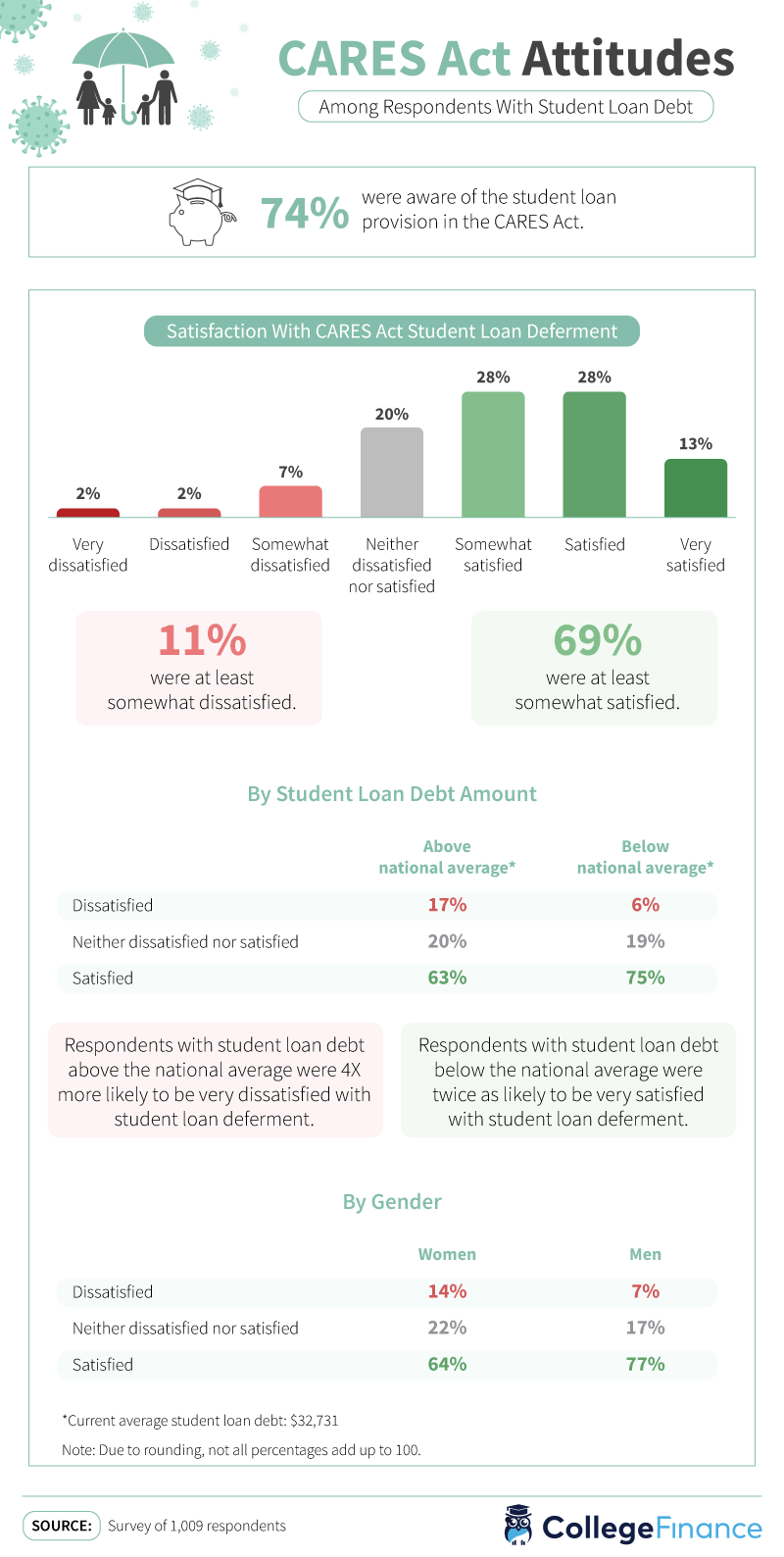 Nearly three-quarters of respondents were aware of the CARES Act student loan relief provision, and the majority felt satisfied with the efforts made by the government (69% said they were either somewhat satisfied, satisfied, or very satisfied). However, another 20% were indifferent, and slightly more than 1 in 10 were unhappy with the situation.

The most significant differences in opinion were brought to light by the amount of student debt respondents had: Those whose debt surpassed the national average ($32,731 per borrower) were four times more likely to feel very dissatisfied with the extent of the CARES Act. Women were also less satisfied than male respondents, on average.

It’s not often that people get a multi-month break from having to pay off their college loans, so where will the extra money be going?

Emotionally speaking, the effects of the CARES Act loan payment deferral were significant: 63% of respondents said their stress levels were down, 62% were less anxious, and 52% felt less depressed. This is, of course, in the context of what’s increasingly known as the college anxiety epidemic, characterized by a twofold increase in the number of anxious students between 2008 and 2018.

Given their responses to this survey, it’s no wonder students are so high-strung: Aside from general bills (59%) and maintaining their standard of living (58%), respondents were aiming to spend their newfound savings on such baseline expenses as affording food (48%), paying rent (39%), and avoiding credit score issues (37%). A recent study found that nearly half of college students experience food insecurity, which is “limited or uncertain access to nutritious food.”

The CARES Act spelled hope for many: 77% felt that the student loan deferment measures would be either somewhat, moderately, or very helpful to their situation. This sentiment was expressed by more or less the same proportion of people regardless of gender or debt levels.

The uncertainty that accompanies college graduation is nerve-wracking on a regular day, but what happens when a pandemic is thrown into the mix? 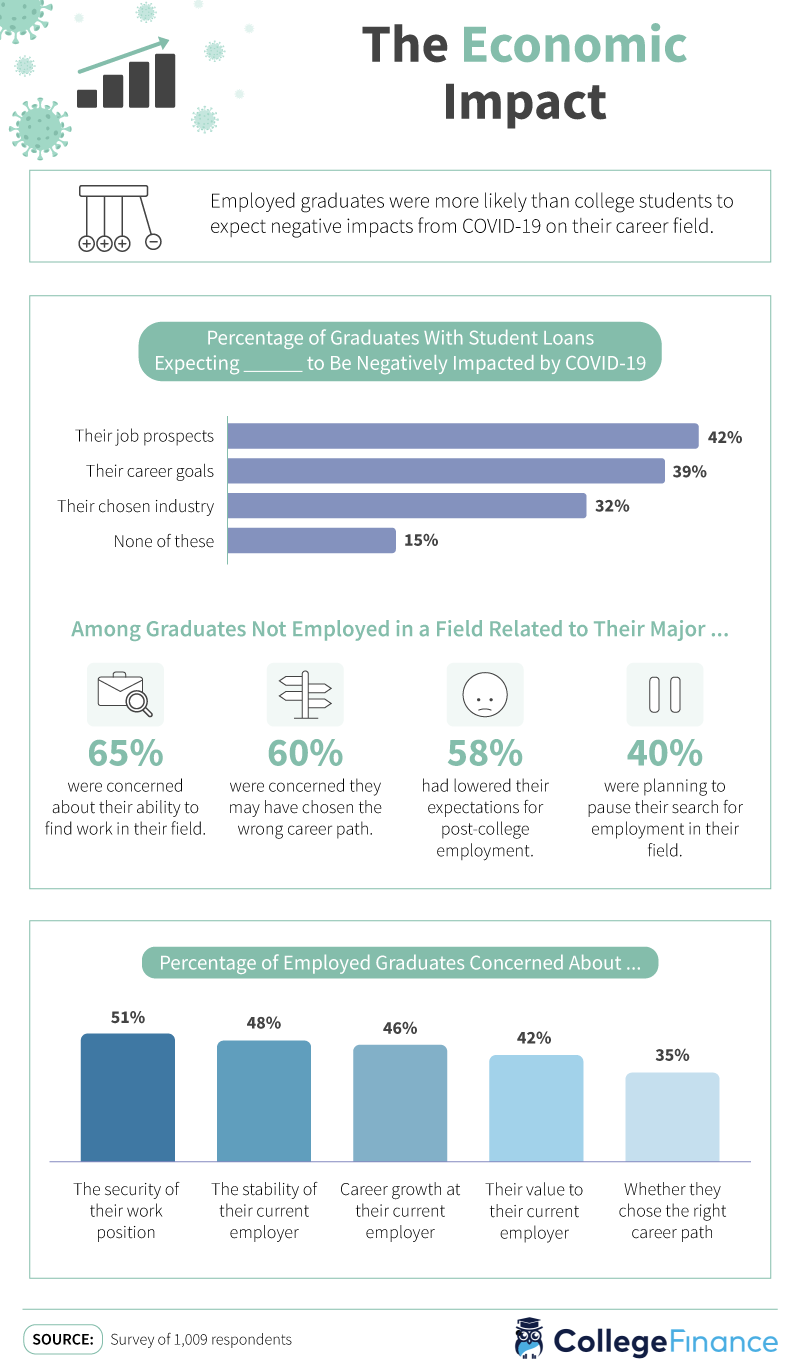 The rampant job loss and economic downturn that has accompanied the coronavirus had many of our respondents sweating. Among college graduates with student loans, 42% said they were worried their job prospects would be affected by the current situation, and 39% felt it would hinder their career goals. Thirty-two percent were worried about the impact on their industry.

Indeed, the employment landscape in the U.S. is looking bleak these days: Most industries have taken a significant hit, spelling layoffs for millions of workers (especially in the leisure and hospitality industry, as many restaurants and hotels have shuttered).

The most prominent concern among graduates who were not yet working in their field of study was, of course, the ability to find a job in their desired industry (65%). They also worried about having chosen the wrong career path (60%) and downgraded their expectations for their future job (58%). Meanwhile, graduates who had managed to land a position in their field were most concerned about job security (51%), their employer’s stability (48%), and their career growth (46%).

A Resource to Rely On

In the age of COVID-19, uncertainty looms in many ways. Overall, students were satisfied with how the government set up the student loan deferment provision, although respondents with more debt wanted to see more done. Now that loan payments and interest accruals are on hold, most indebted students will be using their spare cash to pay bills, keep their lifestyle afloat, and cover rent.

Graduates felt a fairly significant amount of unease when it came to their career prospects and stability, citing worry about finding a job in their field if they were not currently employed and hanging onto their job if they did have one. More than ever, students are feeling the weight of the financial responsibility that rests on their shoulders, and College Finance is here to help. Our student loan repayment, budgeting, and financial planning resources will cover everything you need to know about staying afloat during difficult times.

To help ensure that respondents took our survey seriously, all respondents were required to identify and correctly answer an attention-check question. In some cases, questions and responses were rephrased for clarity or brevity. These data rely on self-reporting, and statistical testing was not performed on these findings. Potential issues with self-reported data include, but are not limited to, exaggeration, selective memory, and attribution errors on the part of respondents.

College Finance is all about best practices, so here’s one more: Always link back to the original article each time you share our data with friends, family, or colleagues (for noncommercial purposes only, though).